I have this small but growing idea Bill McKibben may be one of the most important people this century.

Why? He could be the guy that heralded the downfall of the richest industry the world has ever seen. The industry that’s embedded in so much of our lives right now. The fossil fuel industry.

He’s certainly made it his goal to bring them down. It’s a tall order. A David and Goliath struggle. He admits himself he may not see it in his lifetime, but there’s no denying he’s helped get the ball rolling. And that’s major. The marker for a new era, the next industrial revolution.

The Environment Show caught up with McKibben as part of our series on the world’s environmental leaders. Here’s our 10-minute interview –

Who is Bill McKibben?

Bill McKibben is an unlikely hero. Watch and listen to his talks. His demeanor may seem awkward at first, but listen to what he’s saying.

You can’t dismiss what’s really happening on the planet. And you begin to see Big Oil, Big Coal and Big Gas in a new light. Think Big Tobacco and how we see that industry now – and how that’s shifted in our lifetime. McKibben has put some grease under the wheels of the fossil fuel industry and given it a nudge down the slippery slope to the same fate.

And Bill is clever. One of the ways he’s started to destabilise and re-frame fossil fuel companies is by using a language they, and everyone, understands. Money.

He picked up on the idea of divestment used by the anti-apartheid movement in the 1980s. This was the tactic of putting pressure on big institutions to pull money from companies doing business in South Africa. It was a major catalyst for change of an entrenched system.

In the same way, Bill McKibben has kick-started a movement to pull funds from fossil fuel companies. First with universities, then cities, churches and other large funds across the world have followed suit. These include the Rockefeller Foundation and the $1tn Norwegian Sovereign Wealth Fund (which both ironically made their fortune from oil.) As Bill says, “the smart money is cashing in at the casino and getting out.”

And now individuals with their own Pension (Superannuation) Funds are starting to ask where their money is going too.

It’s slightly shocking to see how many of these funds are invested in fossil fuel companies. Have you looked at your own fund? (Click on the following link to see a comparison of investment in fossil fuel by Australian Superannuation funds.)

But the starting point for Bill’s activism and his clear strength is his writing.

Before I interviewed him, I made a point of reading a few of his famous articles. Many were lengthy, but a great read. So I read more and more.

I have no doubt now he’s the best writer on climate in the world. And he’s certainly one of the world’s best environmental writers. Do yourself a favour and read some of the articles I’ve compiled (later in this post.)

I’ve also put together in this post the best of his other work – including documentaries, interviews, talks, books, useful links, social media platforms and more. But first, here’s an overview of his career.

Bill started by writing about the climate crisis in books and articles. He soon realised for things to change he needed to do more. Over 10 years ago he formed 350.org to bring people together to help push for action. McKibben and 350 have led a series of global campaigns in that time.

Their latest campaign is to:

“At 350.org, we’re rolling out a Fossil Free campaign across the globe to pressure governments to sign up for 100 percent renewable energy, blocking new pipelines and frack wells as fast as the industry can propose them, and calling out the banks and hedge funds that underwrite the past.”

I interviewed Bill when he visited Australia in 2018 to add his voice to the #StopAdani campaign. (Adani Corp plan to build the world’s largest coal mine in Queensland.)

Bill is a great writer. If you’re interested in his work, it’s worth absorbing some of his articles. I’ve pulled together some of Bill’s best:

‘How extreme weather is shrinking the planet’, The New Yorker, 26 November 2018

‘Hiroshima, Kyoto and the bombs of climate change’, The New Yorker, 27 April 2018

‘Winning slowly is the same as losing’, Rolling Stone, 1 December 2017

‘We need to literally declare war on climate change’, The New Republic, 15 August 2016

‘It’s time to stop investing the fossil fuel industry’, The Guardian, 30 May 2013

And there’s more. Bill is a prolific writer. Via the following links you can see his past and future articles in:

There are a few interesting documentaries which have helped bring Bill’s ideas to life.

The most notable documentary being ‘Do the Math’ released in 2013. (It’s 45 minutes.) Worth watching.

‘The Story of Climate Change’ is a good wrap up of how our understanding of climate change came about, where we’re at, and what we can do from here. (It’s 12 minutes.)

To see a full talk by Bill, check out ‘The Climate Fight at a Desperate Moment’. This is one of the better recent ones. It’s 28-minutes.

If that’s all too serious for you, here’s a 7-minute interview with tonight show host Bill Maher:

Bill is also a prolific writer of books. Here are his most notable books on climate. 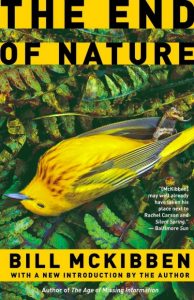 This is Bill McKibben’s groundbreaking book that alerted a wider audience to the threat of climate change. But there’s a deeper thread to this book still relevant today – that our survival is dependent on a fundamental, philosophical shift in the way we relate to nature. 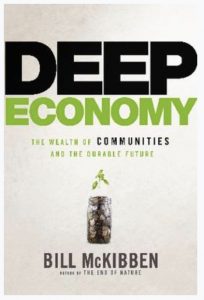 ‘Deep Economy: The wealth of communities and the durable future’ (2008) 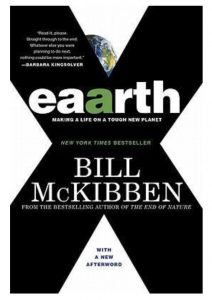 McKibben’s earlier warnings about global warming were, of course, unheeded. In this book, he argues we need to acknowledge that massive change is not only unavoidable but already under way. Our old familiar globe is suddenly melting, drying, acidifying, flooding, and burning in ways that no human has ever seen. “We’ve created, in very short order, a new planet, still recognizable but fundamentally different. We may as well call it Eaarth.” 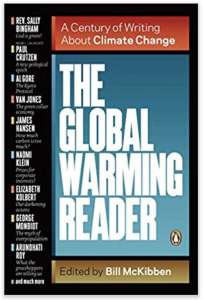 ‘The Global Warming Reader: A century of writing about climate change’ (2012)

McKibben edits a collection of writing by Al Gore, Naomi Klein, Elizabeth Kolbert, Van Jones, James Hansen, Paul Crutzen and other essential voices on global warming, from its 19th-century discovery to the present. 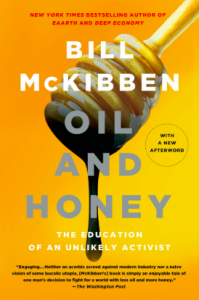 ‘Oil and Honey: The Education of An Unlikely Activist’ (2014)

In this book, Bill McKibben recounts the personal and global story of the fight to build and preserve a sustainable planet. This follows his protest of the Keystone pipeline and subsequent arrest. Oil and Honey is McKibben’s account of the two sides of the global climate fight – people working at the local level to the much larger fight against the fossil-fuel industry. 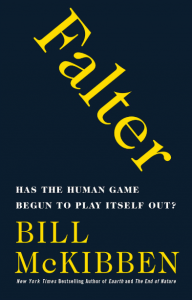 In April 2019 Bill McKibben releases ‘Falter’. This book updates us with the latest on climate change and layers other worrying threats to humankind. McKibben writes of the very real possibility that it may be too late for our species to make the changes necessary to ensure our own survival. Confronting, but necessary reading.

Via this link, you can also find all of Bill’s McKibben’s Books on Amazon.

Here are some of the best quotes I found in my research.

“The first rule of holes is that when you are in one, stop digging.”

“Winning slowly is the same as losing.”

“We need to view the fossil-fuel industry in a new light. It has become a rogue industry, reckless like no other force on Earth. It is Public Enemy Number One to the survival of our planetary civilization.”

“We’re not going to win by changing light globes. We need you to be deeply, politically engaged.”

“Physics doesn’t care what your spin is.”

Bill McKibben co-founded 350.org, an international climate campaign that works in 188 countries around the world. It draws its name from climate scientist James Hansen’s contention that any atmospheric concentration of carbon dioxide above 350 parts per million is unsafe.

“If humanity wishes to preserve a planet similar to that on which civilization developed and to which life on Earth is adapted, paleoclimate evidence and ongoing climate change suggest that CO2 will need to be reduced to at most 350 ppm.” ~ Hansen et al

Note that current atmospheric CO2 is already well over 400 parts per million.

What you can do

Think global warming is too big for an individual to do anything about? Here’s what Bill McKibben says you can do about climate change …

Will the changes Bill McKibben says the world needs actually happen? Or will humankind indeed falter?

It may be a David and Goliath struggle with the fossil fuel industry. But as McKibben reminds us in the ‘Do the Math’ doco, David did win.

What do you think? Let us know in the Comments below.

This Bill McKibben profile and interview is part of our series on international environmental leaders.

George Monbiot finds a kinder politics in 'Out of the Wreckage'