Jane Goodall’s story has been the subject of numerous articles, books and films.

The young English woman who ventured to Africa in 1960, conducted chimpanzee research and wound up revolutionising primate science.

What helps make the story unique is that Jane started with no formal background in research. But she did have a passion for and deep empathy with animals.

Now aged in her 80’s Jane still travels 300 days a year as a tireless ambassador for the natural world. She still has extraordinary passion for the environment – as you’ll hear in my interview with her. (15 minutes.)

“My mission is to create a world where we can live in harmony with nature.” ~ Jane Goodall

Jane was born in 1934. From early childhood, she had a deep love of animals and a desire to work with them in Africa.

In the late 1950’s she got the chance to travel to Kenya. There she met anthropologist Louis Leakey.

Leakey was looking for researchers to study primates and wanted someone who could observe them without preconceived notions. Jane was the perfect person for the job despite her lack of university training.

Leakey employed Goodall to observe chimps. In the Summer of 1960, at age of 26, Jane set up camp at Gombe Stream Reserve near the shores of lake Tanzania to conduct fieldwork.

You can get a sense of the forest where her research started, now Gombe National Park, in this 3-minute video from Google Maps (which is narrated by Jane) –

Goodall spent 6 months in 1960 on her own observing chimps from a distance with binoculars. Over time she gradually drew closer. Gradually they became used to her as she sat and wrote notes.

She got closer to wild chimps than anyone before her. And was able to make important new discoveries about them. Including that chimps make and use tools, they hunt and eat meat, and they have personalities and feelings.

Jane saw things that the strict scientific doctrines of that time may have overlooked. The idea that animals unique personalities was unconventional for example.

Her findings suggested similarities between chimps and humans existed in more than genes and could be seen in emotion and intelligence and in social and family relationships.

“It isn’t only human beings who have personality, who are capable of rational thought and emotions like joy and sorrow.” ~ Jane Goodall

Jane’s work was not initially taken seriously by the sceptical male-dominated science establishment at the time. She had no science training and no degree other than a certificate in touch typing. She was criticised for suggesting chimps had personalities and giving them names.

But Goodall had a strong mentor and backer in Louis Leakey who encouraged and helped her enrol in a PhD at Cambridge. Jane completed her PhD on the study of the chimpanzees in 1966. All the more remarkable given Goodall didn’t even have an undergraduate degree to begin with.

Leakey also organised for a professional wildlife photographer, Hugo van Lawick, to go to Gombe to document Jane’s work, with the financial support of National Geographic. The photographic record of Goodall’s discoveries helped put them beyond dispute.

Further research through the 1960s and 70s

Goodall spent the 1960s and 70s studying several generations of chimps. She went on to build Gombe into a chimp research station and used her time there to mentor new generations of scientists.

Meanwhile, Louis Leakey set up other studies of primates. He also arranged for Dian Fossey to study mountain gorillas in Rwanda and Birute Galdikas to study orangutans in Borneo.

Jane’s research into chimps at Gombe has been carried on and is now one of the longest running wild mammal studies of all time.

Growing awareness of her work

Jane and the chimps became known internationally courtesy of coverage in wider media from the mid-60s. Starting with this cover story in National Geographic in 1965 –

And this National Geographic television episode in 1971 –

In 1971 Jane also published her first book about her experience with chimpanzees ‘In the Shadow of Man’.

And then in 1977 established the Jane Goodall Institute to advance her work around the world.

There’s more about her early work in this article from National Geographic ‘How Jane Goodall Changed What We know About Chimps’.

From scientist to conservationist

A major turning point for Jane Goodall was 1986 when Goodall attended a conference of primatologists in Chicago.

She was shocked to hear that in every place where primates were being studied they were under threat from a range of environmental challenges – most notably deforestation due to population growth, logging and mining. But also from the live animal trade, hunting for meat, and the use of chimps in medical research.

Then in the early ’90s, Jane flew in a small plane over the Gombe Reserve and realised the scale of the destruction around her own beloved forest. Bare hills surrounded the Reserve. Seeing it convinced her the chimps at Gombe would be in trouble if she did not act.

She also realised if she was going to take pressure off the local environment and protect the chimps, it would require helping improve the lives of the people living in the neighbouring villages.

This marked a major shift for Goodall. Her work expanded and took a wider view of the environment, environmental justice and social change. She set about working with local people on the ground to find out how she could best help the situation of the villagers. This led to her to help set up programs of finance (microcredit), health (family planning), and education (keeping girls in school.)

“Change happens by listening and then starting a dialogue with the people who are doing something you don’t believe is right.” ~ Jane Goodall

In this 8 minute interview, Jane describes her work with local villagers, how it came about, and why it was important for protecting the forest and the chimps –

As she became more involved with local people, she realised the importance of young people in bringing about change.

In 1991 Goodall founded ‘Roots and Shoots’ – a program which trains young people to be conservation leaders. It encourages young people to take action in their communities to make a difference for people, animals and the environment. The program is now in over 100 countries.

“There is a powerful force unleashed when young people resolve to make a change.” ~ Jane Goodall

Now aged in her mid-80s Jane Goodall continues the work of her Institute and in spreading the message of environmental conservation.

She travels about 300 days a year to lobby governments, visit schools and give speeches. She speaks about the threats facing chimpanzees and environmental crises facing the planet as a whole.

Her pitch is the interconnectedness of all living things, the collective power of individual action, and her reasons for hope.

Goodall believes human beings can heal the harm they’ve inflicted on the planet. Here are the key ingredients she says that’ll help us get out of the mess we’re in:

You can read more via the Jane Goodall Institute’s ‘Reasons for Hope’.

Jane has also written a book entitled ‘Reason for Hope: a spiritual journey’. It’s a personal account of her life, values and convictions. It plots her moral evolution and makes the case for human spirituality in shaping a better world.

“It’s knowing what can be done that gives people the courage to fight.” ~ Jane Goodall

Jane Goodall has won many awards for her work. She has been awarded as a UN Messenger of Peace and a Dame Commander of the British Empire.

Time magazine named Goodall one of the most influential people in the world in 2019.

Jane’s research from 1960 overturned many scientific assumptions of that time. When Jane began her research, scientists did not understand how closely related humans are to chimpanzees. Animals were considered wild and without human qualities like compassion and logic.

Jane found surprising similarities in behaviour between humans and chimps. She showed chimps were intelligent enough to make and use tools. And she showed the chimps had personalities and experienced emotions. (At that point it was thought in science these were traits reserved only for human beings.)

Her observations challenged previous notions what it meant to be human and our place in nature.

Jane also pioneered a methodology of observation and note-taking over a long period of time, integrating herself into the community she was studying. She also developed protocols for observation, documentation and analysis.

Jane’s research into chimps has been carried on and is now one of the longest-running wild mammal studies of all time.

Jane proved women could be successful as scientists at a time when science and her field was dominated by men. Her work has inspired other women in science.

“Here we are, arguably the most intelligent being that has ever walked planet Earth, with this extraordinary brain, yet we’re destroying the only home we have.” ~ Jane Goodall

A timeline of Jane Goodall’s life and work

1962 Starts PhD at Cambridge University. Travels between Cambridge and Gombe.

1965 First building at Gombe, the beginnings of a permanent research centre.

1986 Attends Chicago Academy of Science conference where she learns about problems facing chimpanzees worldwide including habitat destruction and medical research on chimps. Arrives as a scientist, leaves as an activist.

2002 Honoured as a Messenger of Peace by the United Nations.

2003 Honoured as a Dame of the British Empire.

Jane began travelling internationally to educate people about chimpanzees and the environment in 1999. She still travels 300 days a year.

Jane has had some wise and wonderful words to say about everything from our treatment of animals to the power of people to make a difference.

You can find the best of them in our post ‘Jane Goodall quotes’.

“I do have reasons for hope: our clever brains, the resilience of nature, the indomitable human spirit, and above all, the commitment of young people when they’re empowered to take action.” ~ Jane Goodall

Goodall has been the subject of more than 40 films. One of the most recent is from National Geographic entitled ‘Jane’. It came about after 65 hours of film footage was discovered in 2015. The footage showed Jane’s work in Gombe in the early 1960s. It was shot by photographer and filmmaker Hugo van Lawick.

Here’s the trailer for the documentary ‘Jane’ –

You can buy or watch the film ‘Jane’ online via Amazon. 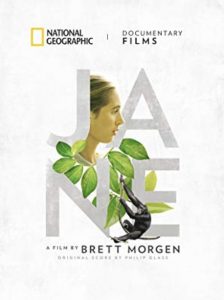 In this TED talk ‘What Separates Us From Chimpanzees’, Goodall argues that the only real difference between humans and chimps is our sophisticated language. She urges us to start using it to change the world for the better.

Goodall has authored many books. In this section, you’ll find her more famous and important books.

Her first breakthrough book was ‘In the Shadow of Man’ which was originally written in 1971 and updated in 2010. 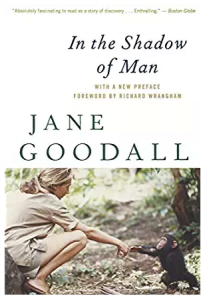 Later she wrote a personal account her life and personal journey ‘Reason for Hope: A Spiritual Journey’ (with Phillip Berman in 2000.) 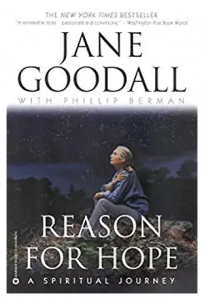 She has written other books about her life and work, including: ‘Jane Goodall: 50 Years at Gombe’ (in 2010) and ‘Untamed: The Wild Life of Jane Goodall’ (with Anita Silvey in 2015.)

And she has written specifically about the plight of animals, including ‘Hope for Animals and Their World: How Endangered Species Are Being Rescued from the Brink’ (with Thane Maynard and Gail Hudson in 2011.)

Jane has an online course teaching conservation via Masterclass.

You can find more about the Jane Goodall Institute at www.janegoodall.org.

There’s more about her youth program Roots and Shoots at www.rootsandshoots.org.

Inspired? Have other ideas? Have we missed something? Let us know in the Comments.