Paul Hawken is a luminary of the modern environmental movement.

He’s written a number of groundbreaking books. Particularly on how business can work together with nature. Those books have included ‘The Ecology of Commerce’ and ‘Natural Capitalism’.

Now he’s taken on the monumental challenge of climate change – with ‘Drawdown’.

It’s an ambitious project that pulled together top researchers and scientists from around the world – to identify and rank the 100 most effective solutions to global warming. Not just to slow it down, but to reverse it.

In this interview, Paul and I discuss the most important and bold ideas in Drawdown. Ideas that are refreshingly practical. But Hawken is a deep thinker. Listen out for his philosophical take on the climate crisis.

Drawdown is both an NGO and a book.

(Via this link you can read our review of the Drawdown book.)

What follows in this post is a brief profile of Paul Hawken – including the work that led up to Project Drawdown and an introduction to Drawdown itself. (This profile is part of our ongoing series on the world’s environmental leaders.)

Paul Hawken started as a pioneering entrepreneur in the late 1960s – setting up one of the first major natural food companies in the US and then a horticultural business in the 1970s. Along the way he become a champion of sustainable business practices.

He went on to write a book about his experience and thinking – ‘Growing a Business’ which became an acclaimed TV series on PBS in the late 1980’s. 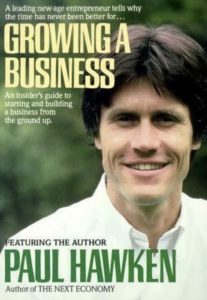 His next book ‘Natural Capitalism’ popularised the notion of ‘natural capital’. In it Hawken argued that business needed to properly account for the natural resources and ecosystem services that made their economic activity possible. ‘Natural Capitalism’ was named as one of the 5 most important books in the world by President Bill Clinton.

“Natural capital is easy to overlook because it is the pond we swim in. One can live perfectly well without ever giving a thought to the sulfur cycle or wetland functions. Only when the benefits nature provides are disrupted do we take notice.”

In the 1990s and onward the world’s biggest environmental challenge, climate change, began to occupy more of Hawken’s thinking.

When the IPCC (Intergovernmental Panel on Climate Change) released their report in 2001 with clear evidence of climate change and its impacts, he began to wonder about the flip side – the solutions.

Hawken likes to point out how extraordinary the science is around global warming. The fact that the world’s top scientists have come together in such a way to meticulously lay out the facts. As he says, what they’ve done is lay out a remarkable problem statement. The largest, most challenging problem statement in human history.

For Hawken the problem was clear. But what about the solutions?

“Once you have a problem statement, what you don’t want to do is just push people’s face into it all the time. What you want to do is say ‘Let’s go solve the problem.’”

During the 2000’s Hawken asked academics and environmental advocates about rigorously compiling and ranking the most effective solutions. Just about everyone thought it was a good idea, but could he get anyone to do it? No.

So he gave up asking and organised it himself.

The catalyst for action came in 2012 when Hawken read Bill McKibben’s confronting article ‘Global Warming’s Terrifying New Math’. In it McKibben warned about the amount of fossil fuels that the fossil fuel companies hold in reserve. Enough to cook the planet if those companies were to carry out their business plans. (You can hear more in our interview with Bill McKibben.)

By 2014 Paul Hawken had initiated Project Drawdown. The project aimed to find the “100 most substantive solutions to global warming.” Not just to slow it down, but to reverse it.

You may have heard of drawdown in other contexts, but on global warming:

“Drawdown is the point in time when the concentration of greenhouse gases in the Earth’s atmosphere begins to decline on a year-to-year basis.”

To come up with the plan Hawken helped gather a team of over 200 scholars, scientists, policymakers, business leaders and activists to map, model, measure and compare the best solutions. Interestingly, their approach was to find solutions that already existed and were technically viable.

Whilst there were organisations and people around the world doing research on solutions to global warming, Project Drawdown was the first effort to measure and project the collective impact of a range of solutions implemented at scale.

“Rather than focusing on a single solution or sector of solutions, Project Drawdown has done the math on what humanity is capable of achieving with the broad range of tools already in use around the globe.”

Hence Project Drawdown’s claim to be “the most comprehensive plan ever to reverse global warming”.

This 12 minute video is a pretty good introduction to Drawdown –

The Findings of Project Drawdown 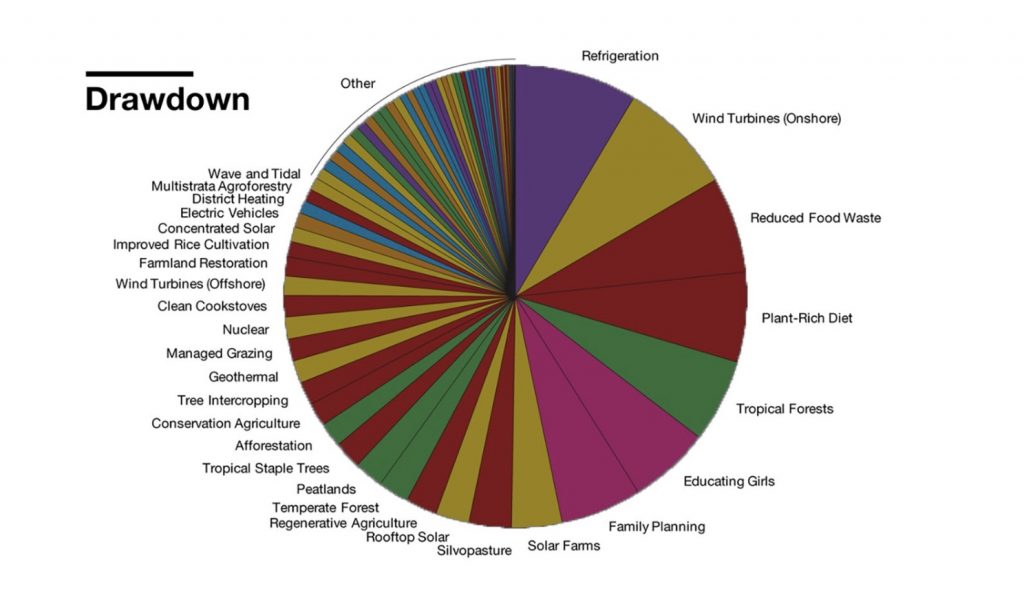 You can see in the yellow slices the different energy solutions. Of those wind and solar were the big contributors, but also geothermal, wave & tidal, and yes, nuclear can play a role. Changing from fossil fuels to other sources of energy was always going to be important and was a fairly predictable outcome of the research.

What Hawken and his team didn’t expect was how many of the solutions related to food production and land use. There were a whole series of these – as you can see in the many red and green slivers in the pie chart.

Another remarkable finding was the importance of empowering women and girls (the pink slices at about 5 o’clock on the pie.) In individual rankings ‘Educating Girls’ was 6th and ‘Family Planning’ 7th out of the 100 overall solutions. So quite high up in the scheme of things. In fact the two are related and if considered as one item would have been the most significant of all the solutions.

Probably most surprising of all, changing the way we do refrigeration (the purple sliver on the pie) is the number one way we can help bring down greenhouse gases. That’s because, as Paul says in our interview, the gases are thousands of times more powerful than CO2.

Included in Project Drawdown’s mandate is the dissemination of information about the findings. One of those ways is the book ‘Project Drawdown: The Most Comprehensive Plan Ever Proposed to Reverse Global Warming’ which was edited by Paul Hawken. they have also created ‘Drawdown Learn’ to involve educators and students.

Here’s a summary of Hawken’s most notable books – 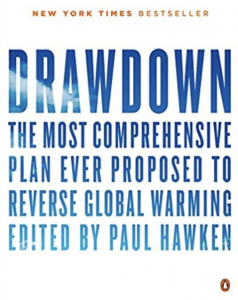 ‘Drawdown: The Most Comprehensive Plan Ever Proposed to Roll Back Global Warming’, 2017

Hawken brought together an international coalition of researchers to identify and rank the 100 most effective solutions for global warming. Not to slow it down, but to reverse it. Although the project was essentially a giant maths exercise, this book documents their findings in an easy to understand format.

Hawken’s contention is not far fetched. 80 of the 100 solutions are already in existence. And interestingly, 98 of the 100 solutions will clearly improve our quality of life in any case. (“No regrets” solutions as Hawken says.) This book is essential reading for anyone who cares about how humans are going to get through the 21st Century on this Earth. 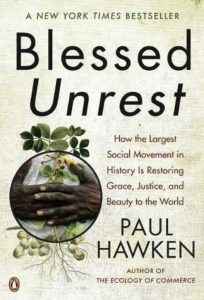 ‘Blessed Unrest: How the Largest Social Movement in History is Restoring Grace, Justice, and Beauty to the World’, 2008

Hawken spent many years researching organisations large and small dedicated to the environment and social justice. He argues these groups collectively comprise the largest movement on earth, a movement that has no name, leader, or location and that has gone largely ignored by politicians and the media. In Blessed Unrest he explores the diversity of the movement – its ideas, strategies, and history.

‘Natural Capitalism: Creating the Next Industrial Revolution’ originally published in 1999.

‘Natural Capitalism’ has been read and referred to by several heads of state including President Bill Clinton, who called it one of the five most important books in the world today. The book was co-authored with Amory and Hunter Lovins. 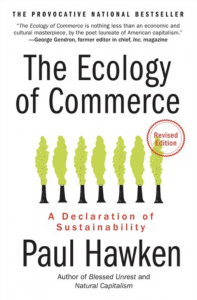 ‘The Ecology of Commerce: a declaration of sustainability’ originally published in 1993

Hawken argues that while business has been responsible for terrible degradation of the environment, it also holds the most potential for solving our sustainability problems. And he says that if we are to be truly sustainable, business will need to learn from nature:

“Ecology offers a way to examine all present economic and resource activities from a biological rather than a monetary point of view.”

Here are some articles written by Hawken. They coincided with the release of his previous books –

‘The Ecology of Commerce: an essay on the responsibility of business to society and the environment’, Inc magazine 1992

Hawken regularly gives talks about his work. In this speech at Seattle Town Hall in 2017 he discusses his thinking about climate change and Project Drawdown –

You can find Hawken’s bio and more about his latest work via his website – www.paulhawken.com

Hawken is a deep thinker. Through his writing and talks he’s had some important things to say about the environment and sustainability.

“We have an economy where we steal the future, sell it in the present, and call it GDP.”

We’ve put together a collection of Paul Hawken’s best quotes – including his thoughts on the climate crisis and how to solve it. Worth a read. It’ll help you see things differently and positively. Plus you’ll get a better sense of the man.

To cap off, we’ve included 3 minutes of Hawken thinking big. It’s his “Dream of a 100 Year Plan” (via the good folk at Bioneers.)


Here, here. We should be planning how we’re going to make things better for our kids and grandkids. Let’s plan for the next 100 years, instead of the next 3 or 4. (It’s a time frame that’s more connected to the Earth’s cycles, rather than the human political cycle.)

Read our summary and review Paul Hawken’s book ‘Drawdown: the most comprehensive plan ever to reverse global warming’.

Check out our collection of the Best Paul Hawken Quotes.

See more of the people we’ve profiled in The Environment Show series on ‘The World’s Environmental Leaders’.

Let us know what you think of Hawken’s work. If we’ve missed something important about him, let us know too.

The Best Environmental Blogs in the World