Paul Watson is a man on a mission – a lifelong mission to protect the creatures of the Earth, most notably those in our oceans.

In this post, you’ll find everything you need to know about the man. But to get a better sense of his passion, have a listen to my audio interview with Paul Watson. (Click on the link. It’s 4 minutes long.)

(I spoke by satellite phone to him in the Antarctic at the height of the ‘whale wars’, the day after his ship had chased down and collided with a Japanese whaling vessel.)

Paul Watson is a polarising character for sure. Governments and even Greenpeace have labeled him an eco-terrorist. But for many people, he’s an eco-hero – the man responsible for saving thousands of whales and sea animals.

What makes Paul Watson unique is that while some people protest environmental injustice, Watson steps in and intervenes. For 40 years he’s been taking direct action to protect marine life. Including putting himself between whales and harpoons.

“I never really look at myself as a radical activist; I am more a conservative. I mean, the conservatives are trying to conserve; the radicals are destroying the planet.” ~ Paul Watson

You may have heard of the organisation he founded – the Sea Shepherd Conservation Society. It’s not hard to miss its trademark skull and crossbones. A logo that advertises to friends and foe the group’s coercive approach to conservation.

Paul Watson grew up in a fishing village on the East Coast of Canada. When he was 11 years old he discovered trappers had been taking local beavers. Watson was so incensed he walked the trap lines setting beavers free and destroying the traps.

By 18 he found himself involved with a fledgling group of eco-activists in Vancouver. The very people that went on to form Greenpeace. There are conflicting reports as to whether Watson was a founding member, but he was certainly instrumental in early campaigns.

There’s a documentary about the early days of Greenpeace in the 1970s called ‘How to Change the World’. It’s a great film. Worth watching. In it, you’ll see the makings of a young Paul Watson.

The ‘How to Change the World’ documentary is available online.

Greenpeace started by campaigning against nuclear testing but soon came to focus on whale hunting and plummeting whale populations.

The whale hunt that changed his life

In 1975 Paul Watson joined one of the early Greenpeace expeditions confronting a Soviet whaling fleet off the coast of California. With Bob Hunter, the co-founder of Greenpeace, Watson came up with the idea of putting their bodies between the harpooners and the whales.

Inspired by Gandhi, the thinking was that the harpooners wouldn’t fire with people in the way. But they hadn’t quite figured on the Russians’ reaction.

According to Watson, the Russian captain looked at the two in their dinghy, smiled, and ran his finger across his throat. Moments later a harpoon screamed past their heads and struck one of the whales in the back.

Another whale, the largest in the pod, then dove down and launched itself at the whaling ship. But the harpooner was ready and fired another shot which struck the whale. Watson says that whale could easily have landed on him but changed direction to save his life. He says the whale looked right at him in a haunting moment of connection. It was an experience that changed his life:

You can read Paul Watson’s recounting of the event for The Guardian ‘What I learned the day a dying whale spared my life’.

In defence of seals

Watson went on to become active on other fronts, like the clubbing of fur seals by his own countrymen. Along with Greenpeace, he helped make it an international issue which led to a partial ban. (A ban came in on young white-coated seal pups. The Canadian seal hunt is, however, a troubling on-going issue.)

“Killing a baby seal is about the easiest thing you can do if you’re inclined to be sadistic; you certainly can’t say there’s any sport in it – the animal is totally defenceless.” ~ Paul Watson

Watson did what he could to protect seals. He even painted hundreds of seal pups with an organic red dye to render their pelts commercially worthless. (Ironically he was charged for doing so under the Seal Protection Act by the Canadian Government. One of the few times he was successfully charged during many decades of activism.)

Parting with Greenpeace (and the birth of Sea Shepherd)

It was only a matter of time before Watson’s do-whatever-it-takes approach became incompatible with Greenpeace’s leaning toward bearing witness and nonviolence.

In 1977 Watson was ousted from Greenpeace. The board reportedly voted 11 to 1 to remove him (with the one vote to keep him in Greenpeace being himself.)

Then in 1978, with financial support from the Fund for Animals, Watson took possession of a British trawler and renamed the vessel the Sea Shepherd.

It was a turning point where he could do things his own way to take direct action and save animals. From that point, there’s an incredible chronicle of events right through Sea Shepherd’s history.

Some of Watsons’s tactics have included ramming ships, fouling propellers with rope, and throwing stink bombs onto the decks of whaling vessels. He’s even threatened to sink his own ship at the entrance to a harbour to block sealing trawlers. This is some of how he’s earned the label of eco-terrorist, vigilante and pirate.

The interview I did with Watson by satellite phone was the day after his Sea Shepherd vessel had rammed a Japanese whaling ship in Antarctic waters.

There’s some footage here (2 minutes) of Sea Shepherd’s Bob Barker taking on larger Japanese boats. You’ll get a sense of the high stakes –

How does he justify his actions?

Clearly, he has no time for the Greenpeace approach. (You can hear that in my interview with him too.)

But the love is not lost the other way either. At one point Greenpeace labeled Watson a violent extremist and would no longer comment on his activities.

This was after Sea Shepherd activists scuttled two whaling ships in port in Iceland.

During the resulting storm about it, Watson went to Iceland and challenged the government to arrest him. Instead, they booted him out and now consider him persona non-grata.

“Ships are expendable, whales are not.” ~ Paul Watson

Watson has got himself in trouble with a number of countries, but most notoriously with the Japanese.

For almost two decades the Japanese Institute for Cetacean Research sent a whaling fleet to Antarctic waters to catch an annual quota of whales for “scientific research”.

But as you’ll hear in my interview with Watson those waters are a whale sanctuary – meant for protecting whales and the Japanese exploit a loophole in the long-standing whaling moratorium.

“To me, extremism is targeting endangered whales in a whale sanctuary in violation of a moratorium. That, to me, is extreme.” ~ Paul Watson

The numbers of whales they’re taking also makes a mockery of the science argument. For many years the Japanese aimed for a quota of killing 900 whales. But growing public awareness led to action by the Australian and New Zealand governments in the International Court of Justice to halt the whaling. It forced a compromise number of 330. But that was still 330. A lot of whales.

The Japanese whaling fleet has been described as a “mechanised armada of death.” Despite “RESEARCH” painted in big black letters on its hull, the fleet’s flagship the Nisshin Maru was, in fact, a factory mothership – a floating butchery and refrigeration facility for whales.

No wonder Watson had them in his sights and why he’s so fired up about what they’re doing.

Why are the Japanese so hell-bent on killing whales? After interviewing with Paul Watson, I spoke to Junichi Sato of Greenpeace Japan, to get a better understanding.

Watson, the law and the latest

It’s hard to keep up with the charges and Interpol notices against Paul Watson by various countries. It’s not just Japan and Iceland he’s been in trouble with, but others like Costa Rica and Norway.

For a long time, he was pretty good at remaining immune from prosecution and sanctions.

He’s always strongly defended his actions. Pointing out that the actions of whalers and sealers are simply illegal under international law. And that Sea Shepherd has a right to enforce maritime regulations against them.

“The United Nations World Charter for Nature, section 21, empowers any nongovernmental organisation or individual to uphold international conservation law in areas beyond national jurisdiction and specifically on the high seas.”  ~ Paul Watson

This worked well until recently when the Japanese finally snared him in their own legal net. In 2016 the Japanese Institute for Cetacean Research filed a successful injunction against Sea Shepherd USA.

In 2017 the Japanese whalers geared up with surveillance technology supplied by the Japanese military which enables them to accurately pinpoint and avoid Watson’s ships. Technology Sea Shepherd just can’t match.

Then at the end of 2018 came the good news that Japan will finally end its controversial hunts in the Antarctic, but the bad news that Japan was going to withdraw from the International Whaling Commission and resume commercial whaling in its own waters in 2019 (finally unmasking the veil of doing it for science.)

Has Watson won the battle with Japanese whalers? All the grief Watson caused the Japanese probably led to them pulling out of Antarctica, so you could say he has saved the whales in the Southern Ocean. But the news is not so good for whales in the North Pacific.

Will Sea Shepherd take on Japan in its own waters? That’s a bigger challenge and remains to be seen.

In the end, though, you can certainly say Paul Watson has helped make us much more aware of the slaughter of whales. Something that was happening out of sight and out of mind. And he’s nudged us toward a better understanding that we have a responsibility to look after the natural world and the incredible animals in it.

Here’s what Peter Singer, the Princeton-based ethicist and founding father of the animal rights debate, said about Paul Watson:

“I don’t necessarily support everything Paul does but without the presence of Watson and Sea Shepherd on the high seas there would be much less public knowledge, much less media interest and much less international focus on what’s happening to these whales.”

From ‘Saviours of the Whale’ in The Independent.

Feature photo of Paul Watson for this post by Barbara Veiga.

If you’re really into Paul Watson you may find the following section useful. We’ve pulled together the best film, book, talk, and quotes, as well as his social media platforms. 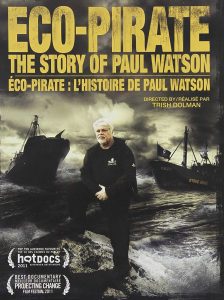 Find the ‘Eco-Pirate: The Story of Paul Watson’ documentary.

(Check out the trailer for ‘Eco-Pirate: The Story of Paul Watson’.) 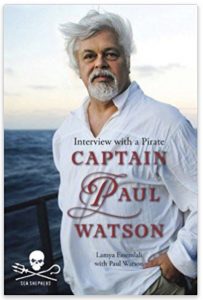 In this book, Paul Watson reveals to shipmate Lamya Essemlali his motivations, campaigns, dangers, and successes. The ‘Captain Paul Watson: Interview with a Pirate’ book is available online.

You can hear Watson’s passion and determination in this 18 minute TED Talk.

He’s a man who doesn’t mince his words …

“If we wipe out the fish, the oceans are going to die. If the oceans die, we die”

And there is so many other classic, confronting, important things he’s said over the years. We’ve put together a whole collection of Watson’s words of wisdom. Check out our Best Paul Watson Quotes.

Watson has written a number of fairly forthright articles. Like this one …

‘The Terrible Troubling Tribulations of Being Called An Eco-terrorist‘

What do you think? Eco-terrorist or eco-hero? Let us know in the comments.

The Best Environmental Books of All Time

Bill McKibben – the lion of the climate movement